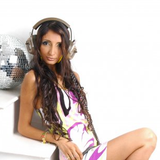 Patchoulee's (a.k.a DJ P) love for music started in the 80’s, heavily influenced by her brother who was DJing old skool house parties playing disco, soul and funk. She soon became addicted to collecting vinyl, this was fueled by the job she landed working for Wiiija Records at Rough Trade; It was here that she got her lucky break DJing for The Beastie Boys during their Ill Communications tour in between their sets at both of their London shows, in Dublin and Paris, her name was thrown up on the posters and her DJ career was launched.

P has been an international professional club and corporate DJ for well over a decade now, having firmly put her stamp on the London club scene and high end corporate events in Dubai.