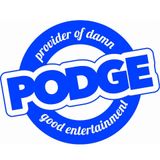 Never miss another
show from PODGE

P.O.D.G.E. was discovered in The Forest of Dean during the treacherous winter of 1982. Little is known about his upbringing but it led him to believe that he was Nick Berry. Unable to cope with the imposter on TV he left the Forest for the bright lights of Walford. Unfortunately due to a terrible sense of direction and having one leg shorter than the other, he ended up in Plymouth where he stayed for 7 years living under the stairs in the Dance Academy from where he would only venture out on the last Friday of the month.

Tired of the shabby Devon streets and seedy 4×4 beats he briefly fled the country and appeared in the American cartoon King of the Hill playing the charismatic young Bobby. After his brief flit with acting he was deported back to his homeland and settled in Bristol.