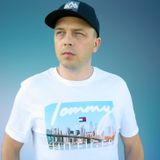 He was there when the Russian DnB movement began in the early 90s. From the big Clubs to illegal Raves in the woods and beaches, he was there. Around 2005 he started a Dj career as a Drum&Bass Dj and played together with acts like Limewax, Cause 4 Concern and many others.

Around 2012 he withdrew and re-grounded himself until 2020. After this long break, he began to seal his love for melodic techno and deep DnB by producing and finally opened two his own Deep DnB Label "Mathematica Records" and Melodic House&Techno Label "QR Sound Records" towards the end of 2021.

By combining the hypnotic tunes and his own introduction of techno and DnB, he always creates a unique timeless sound.