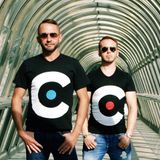 The encounter between Larry and Nicolas in 2015 proves to be explosive. Wishing to join forces both for music production and DJ sets, the two artists with an identical musical culture started meeting in studio, producing numerous e.p and remixes. Their first maxi, Galactica e.p, is released on the very respectable label Xima, based in Miami. Techno oriented, the two tracks of Galactica, Cosmos and Extase, show their darkest and most radical side. Coming next in late 2015 are a techno remix and a super groovy tech-house coproduction with the legendary American Dj Eddie Amador. Ready to take the music industry by storm, Nucci & Rocca are big lovers of round and tribal basses, syncopated vocals, hypnotic and sexy sounds or melodies. Their expert knowledge of clubs and festivals will be a recipe for colored, energetic and positive Dj sets.