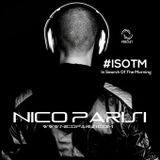 In Search Of The Morning #40
by Nico Parisi Podcast

In Search Of The Morning #39
by Nico Parisi Podcast

In Search Of The Morning #38
by Nico Parisi Podcast

Nico Parisi began his career in 1996 Nico with his first release on Atmoz Records and signed a contract with Antler Subway under his own name but also under the project ,Aqualords'. with hits such as Basstrain , Witches , The Beginning , Children off The Demon , No Bulshit , Evolution and several famous remixes for top artists. His most famous was 'Extreme Trax 'Don't Hold Back' 'and Nunca ' House Of Doom' . that was also released on Tiesto's label 'Black Hole Recordings . Nico Parisi & Erik Hub 'Metro’, was Nr1 in the chart of the famous Armin Van Buuren. In 2011 Nico was offered a contract with Bonzai Progressive . With his first release with Airwave ' Romeo and Juliet and one of the most famous being 'Caress' this release was picked up by Paul Oakenfold and featured on Dj Box 2014 . Nico was asked several times at Tomorrowland and Pukkelpop which for Nico was the highlight of his career so far