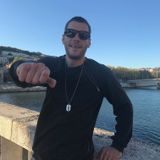 After 15 years filled of experience as a clubber monitoring techno scene and more than 10 years of mixing in total underground, Mare decided to go a little bit more in public. All of his free time he’s giving to the music by listening, gathering and mixing. Mare started as a pure vinyl techno DJ but as a years went by he had expand horizons on equipment and started to play various styles of electronic music, but always holding on a good groovy beat. He is a part of Belgrade’s upcoming DJ group named “REJV OLUPINE” (Rave Wrecks) with which he makes underground parties for 300 people.