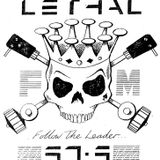 Way back at the start of 1988 a small group of like minded friends came together with a vision to start a radio station in Leeds that they could play their beloved Rap and House music on. This station was named Lethal F.M and they started broadcasting from the Chapel Allerton area of the city every weekend from Friday evening till midnight on Sunday.....The station transmitted on the frequency of 97.9Mhz and the signal was recieved well over most parts of Leeds and it's surrounding areas. Broadcasts were sometimes amateurish and distorted at times but the underlying spirit and energy of the DJs ensured it was highly respected by the listeners. The music on LFM was bang up to minute Rap, Hip Hop, and House. Artists like Sugar Bear, Erik B and Rakim, Cookie Crew and house masters like Todd Terry, Mr Fingers and Phuture all played their part in ensuring the raw energy and quality was first class.