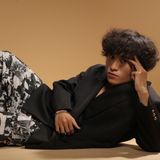 Never miss another
show from LARRIA

As a young DJ / Producer from Sai Gon, LARRIA started producing music in 2014 and first performed in 2016. His style is inspired by genres such as Disco, Funk, Hip-Hop, Future Beat, and City Pop. LARRIA is widely known for his Future Funk-style products, but the young artist is also capable of producing various genres such as Bass Music, Club Music and so on. In 2016, LARRIA released his first Future Funk album: Mai Yeu // LARRIA. The 1997-born DJ / Producer is on the way of affirming his unique Vietnamese classical music based style and deliver that inspiration to the audience.