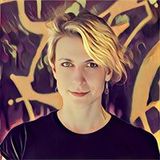 MIX FOR SIGNALL_FM
by Lady Su

Slovak DJ Lady Su has been active in the drum & bass scene since 2009. Her love for electronic music led her as a visitor to several genres, but broken beats resonated in her the most. That was also the reason why she decided to start DJing. During the first attempts at turntables in 2008, Czech DJ Estewes stood by her. He acquainted her with the basics of DJing, which she decided to show to the public for the first time a year later at the Element club in Prievidza. Since then, it has become a regular part of domestic and later foreign events. Over time, she added promotional skills too. She curated her residency night under the name Synapse in Bratislava club Radosť for four years. Her musical taste and feeling for capturing the atmosphere behind the mix, which she acquired during that time, guaranteed her attention from the wider drum & bass community. Ravers could hear her from behind the DJ desk not only in Slovakia and Czech rep.,but also in UK,Hungary,Netherlands and California.