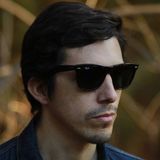 Never miss another
show from Jack_plug

Chilean visual artist, dj and musical producer with residence in Valparaíso.
Since the mid 90´s he has showned an interest for electronic music getting into different styles such as: techno, IDM and ambient.
In 1999 with his brother Felipe Baradit he starts the musical production of the proyect called "Baradit".
In the year 2001 he co-founds the net label "Epa Sonidos" and in 2006, under the alias "Androi_dj", he publishes his first works as a soloist.
The same year the alias changes to "Jack_plug" and is in this proyect where he can developed musical and audiovisual compositions.
His music has been compilated in different albums of various netlabels, national and international like: Epa Sonidos, Tropic-Netlabel, Impar, Modismo and Pueblo Nuevo