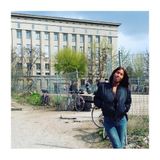 Honey Dijon had carved a distinct niche for herself in the world of underground electronic music, coming to be associated with exquisitely curated cross-genre sets and total dance-floor chaos wherever she plays - from Berghain to Space or Smart Bar. As a producer, her reputation for bringing this knowledge to her forward thinking creations is growing all the time.

Born and raised in Chicago - the home of house music - the city's influence on Honey’s style is deeply ingrained. Like many in the scene, her love affair with music began upon hearing her parent’s soul and R&B records at home. Soon, it was clear to her that she needed to be the one dropping the needle on the record at her parent’s basement parties - at which point there was no turning back - club life beckoned.
Before long she was obsessively collecting tracks from hallowed stores like Imports Etc and Gramaphone in Chicago - developing the taste and style that would become her own.