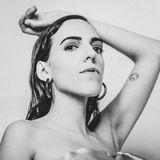 Never miss another
show from Frances Be

Pandora Mixtape
by Frances Be

Session Four
by Frances Be

Session Three
by Frances Be

Session Two
by Frances Be

Session One
by Frances Be

FB´s musical imaginary is somewhere between Detroit, Amsterdam and Berlin. An imaginary full of nuances that gives life to the shadows and blurs the limits that have become so common in electronic music. A universe that tells from the cabin and whose rhythmic script stars in a four on the floor that gives meaning to the whole.
The club is her natural environment. The space where the raver and the DJ converge. Because Frances Be loves to play records but, even when she is spinning a session of hypnotic acid, fast-paced house and futuristic electro, her mind is on the dance floor, with the audience. Captive for her ease and natural composure making it seem easy to be on the most demanding scenarios.
She is also part of KRII, a collective that works to create spaces where women and electronic music meet, such as parties, talks, workshops and debates about feminism in the club and electronic scene.
Instagram: https://www.instagram.com/frances.be/
Booking: inaki@forbiddencolours.net