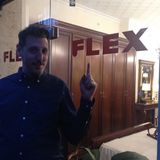 FLEX UNGER is the nome de plume of the composer Pasquale Cangiano Born in Brooklyn, NY in 1974 It was not till much later that the Flex Unger title Started to be used to describe musical output. It actually started as A band name but when Pasquale started to DJ around NYC Flex Unger Seemed to be the best name to DJ under. The Odd Couple character being a big Influence. The first music I made was around 1986 when I was given a tape recorder and Casio keyboard as a present from my mom. Shortly after turntables and a mixer were acquired. I started DJing in many NYC bars and venues in the late 90's and still do to this day.