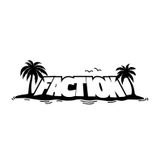 The Faction Sound Crew formed in Vancouver BC in and consists of six members: DJ’s Arems, Tanner, Iron Lyon and Theory plus original members Trigger and Akshun. The crew has been together for over 12 years, consistently smashing parties all over the globe with a wide array of styles heavily influenced by hip hop and dancehall. Faction Sound Crew mixtapes have spread world wide with hundreds of thousands of downloads on their combined catalog to much fan fair.The Faction has also had the chance to do extensive touring throughout North America, Europe and Asia and have opened for and performed with countless big acts. Currently, the Faction is spread out across North America with Arems in Vancouver, Tanner in NYC, Iron Lyon in Miami and Deejay Theory in San Francisco. Each different member can be found in their respective city holding down multiple residencies and constantly touring. Look for the Faction worldwide, destroying a club in your area soon!