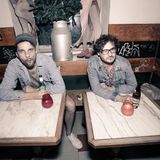 Never miss another
show from FØRGundLÆCHNER

Mix for FM4 Unlimited
by FØRGundLÆCHNER

Munich based DJ and producer duo FØRGundLÆCHNER, consisting of Flo Förg & Zeno Lechner. The team consider DJing as an art form and has been inspired by all kinds of music. FØRGundLÆCHNER have their focus on electronic Music but they simply don't know any frontiers either in their DJ sets or in their productions. The guy´s started to play B2B Sets in 2006 at the Cafe am Hochaus in Munich. Since 2010 they have residency at Munich´s popular Pimpernel Club, wich got very famous guests like Freddy Mercury or Rainer Werner Fassbinder in it´s early year´s. In 2013 Flo and Zeno hosted a row of Parties at different Locations in Munich, called Ramba Zamba with artists like... Ben Mono (Stil vor Talent/Gomma), Functionist (FM4), Felix Felide (KaterBlau), Dusty (Jazz&Milk), DJ Phekt (FM4 Tribe Vibes) and a lot more. In 2014 they released their first Edit of Thomas Dvorak´s Track By The Wall, and in June 2015 their first own produced Track Waganascha.