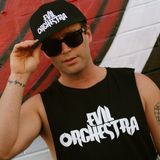 With a stage presence to be contended with,Evil Orchestra whips the crowd into a frenzy at every performance without fail . As well as being one of N.S.W best up coming artist producer/DJ's he also graced the airwaves of Raw F.M and was featured on the producer spotlight segment with his unreleased track Orchestrated Madness being played alongside the likes of Timmy Trumpet and Armin Van Buuren tracks.
As well as supporting artists and being on the same bill with acts such as Teddy Cream, Bonka, Hydraulix & Barong Family Label artists such as Moxi and Wuki just to name a few.

You can also catch Evil Orchestra at his own shows on the Central Coast N.S.W where he also runs multiple events including The Vortex,Church and Circus .With a strong dedicated following of 15,000 + across his social channels you can be certain that the room is always packed and the vibe is always right.
When Evil Orchestra is not DJing and running events he is busy with