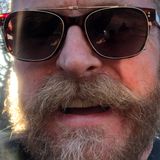 Never miss another
show from Dunkzz

Man about town, likes to chat, and has an unhealthy association with live music, clubbing and general socialising. I am to be found regularly DJing in and around Leith (is it a coincidence it's rated the second hippest place in the UK? - joke), one half of AmbiDECKstrous, we play various bars, clubs & festivals.
I restarted my DJing on vinyl (only) at the Southern Bar in Edinburgh fortnightly some years ago, (where Nirvana once played), until the Council banned all music in the venue...however I then started a brand new night entitled AmbiDECKstrouS @ ElboW bar, with Bill Spice, this ran until November 2013 (sadly the bar closed). We played fortnightly for two years. Now DJ on CD mostly. I've played the Mumbo Jumbo Hogmanay party, as well as festival gigs at Audio Soup and Kelburn Garden Party, and played The Roseleaf bar cafe, for three Hogmanays. After pandemic restarted a new Ambi night in Brass Monkey Shore (Queen Charlotte St) #Keepin'itLeith