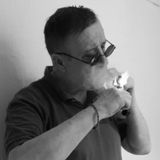 Never miss another
show from DoktorKlein

When DJ at 80's was playing with vinyls and also using synthe and 2 Revox to create digital effects with analog mixers.

At 90's was one of the european pioneers at audiovisual industry creating and producing stop motion animation films with the spanish director Pablo Llorens (2 Goya awards) introducing new techniques to mix 3D digital effects in layered stop motion scenes. The featured film "Juego de Niños" and the TV series "Doc Franky" was produced by Doktor Klein using his real name in that period.

Launch his 1st instrumental LP as DoktorKlein at 1999, "Gramado Road". Many of the tracks was used for other artist to create known hits.
Doktorklein is back with its own personal techno music
Contact and bookings
doktorkleinmusic@gmail.com