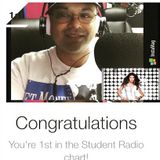 Never miss another
show from DJ Dinny- Keepin' It Real

DJ Dinny is a radio broadcaster and producer who has 25 years of experience having started doing shows back in his school days.
​
Keepin' it Real is a radio show podcast on Mixcloud produced by DJ Dinny. The Show has hit Number One on Mixcloud Student Radio Charts and has gone top 5 on College and Comedy Charts. Meet DJ Dinny- a Communications graduate who lectures in Media and Cultural Studies. Dinny has experience in radio broadcasting, advertising and education leadership.

Keepin it Real is music journalism at its best. Dinny delves into the stories behind his themed Top 10's, mix some great music, flashback to a year in focus, Casey and Dinny's karaoke takes on your favourite hits. Finally DJ Dinny leaps into chartbeat and gives you the lowdown on what is trending on world music charts and plays the hottest song on the planet! The only show in the World which dares to move you from Michael Jackson to Red Hot Chilli Peppers to Ariana Grande in 3 moves!!