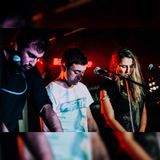 Denis The Night & The Panic Party is a music & visual collective born on the road across Italy and UK around the power trio of Eleonora Fiorani, Nicola Sbrozzi and Alessandro Gobbi from Marche region (Italy).

Juxtaposing elements from various genres like electro-rock, lo-fi, psychedelia, and shoegaze; their stray, eclectic sound has conquered important audiences at Primavera Sound, Waves Vienna, SXSW, and at many Panic Parties spreading across Europe and North America.

After some anticipatory releases like the The Trip Tape Live EP (2014), their debut full length album, Cosmic Youth, co-produced by the band and Livio Magnini (Bluvertigo), was released in 2016. The remix of their single Androgynous Love by French DJ/producer, Étienne de Crécy, charted in the top 20 in Italy and No.1 Electronic album on iTunes Italy and in SE Asia, reaching Spotify’s Viral Top 50 in France.

The band is working on a new concept EP called “Protosongs” and on their second full length album, MEGAEVO.