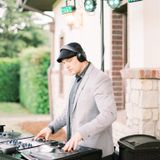 Portland Oregon native Justin Babbitt (DJ paradox), began DJ'ing in the year 2000, founded Paradox Productions in 2006 and has since grown into a multi-talented DJ / MC whose musical arsenal has no boundaries. He continues to shatter the "DJ stigma," while impressing across styles, genres and demographics. Justin's ability to mix from the Temptations to Tupac, Louis Armstrong to Lil' Jon, Def Lepard to David Guetta, Marvin Gay to Macklemore, Jackson 5 to Jack Johnson and everything in-between, while also acting as event host / MC, has established him as one of Portland's most sought after DJs for people seeking the highest level of talent without sacrificing class and professionalism.

It’s no wonder he was is the #1 reviewed DJ on a team voted "Best Wedding DJ in Portland" by Oregon Bride Magazine, Premier Bride Magazine and Wedding Industry Experts. Other acknowledgments include 5X Wedding Wire "Bride's Choice Award," The Knot "Best of Weddings" and Portland's "Small Business Award."