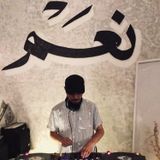 Started his musical journy in the early 90's. Rock was the first music that capitivated him but in the early 2000s, he had moved on to playing music as a DJ to absorb various genres of music.
Techno, House, Jazz, Disco, Rock, Punk, Reggae, Ethnic and even Japanese popular music, his style is turly borderless.
2011 was a remarkalbe year for him. He built up his current music style with Islamic backbone music.
Since then, he has often visited Jerusalem, Bethlehem, etc... for digging vinyls and having a party at a local club.
Cullently, Nakamullah is moving around various parties while working on music simply and sincerely.