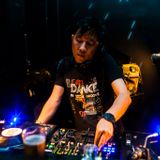 DJ Yu-Ta started his carrier as Hip-Hop DJ in 2000. Continuing his activities as a club DJ, he has also been working as a live DJ for major artists such as mihimaru GT in parallel. Experiencing various kinds of dance music, being affected by Japanese rave culture and the cutting-edge movement of various field communities, he launched an underground indoor rave party “Response” in his hometown, Kichijyoji Tokyo in 2009. Besides, DJ Yu-Ta has been producing the music & art festival “ZIPANG” by inviting only world-class Japanese artists, and a year-end gathering “Onsen-Shukai (温泉集会)” that is held in hot-spring hotels. Having a belief to play vinyl, he continues pursuing his own style which is a borderless music selection from Dub to Hip-Hop, Break Beats, Disco, House and Techno. With a strong passion for vinyl culture, he actively plays all over Japan in indoor/outdoor parties as a DJ and an organizer. He released mix CD “After and After” in 2015.