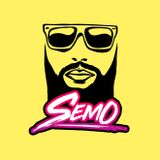 DJ Semo is one of London’s rising DJ Stars with an open format music style. Hand picked by Mostack as his official Tour DJ, Semo has featured at many major festivals and venues all over the world shutting it down with his electric DJ sets leaving crowds in a frenzy.

Semo works very closely within the UK music industry and has played a part in breaking new artists and new music. In 2017 Semo took it up a level by evolving into a DJ/Producer and has dropped some huge productions alongside artists Nicari, Lebs and KC some of which can be found on major streaming platforms and the DJ City record pool!

Semo also hosts some of the biggest events in the UK featuring superstar line ups and his collective Ice Cream Family on the ones and twos. These Ice Cream events have featured the likes of Tory Lanez, Skepta, Krept & Konan plus many many more.

Look out for new music from Semo and make sure to touch down at one of the huge Ice Cream LDN events to see him live in action!