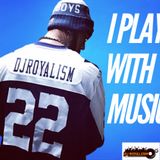 Born and raised in Longview, Texas DJ Royalism has always had a love for music. His early attraction to DJing happened when he watched the movie Juice for the first time. Royalism wasn't able to get DJ equipment at the time due to his involvement in extra-curricular activities in high school. At age 19, Royalism bought his first set of professional DJ equipment once he was enlisted into the U.S. Air Force and stationed at Travis Air Force Base, California. While there he served as a resident DJ for Travis Air Force Base’s NCO Club for 4 years. DJ Royalism hosted many parties and special events during his time in California. Royalism is a seasoned DJ with apparent talent to move and control audiences of all sizes and genres.

DJ Royalism retired from the United States Air Force in 2013 and re-located to the Dallas-Fort Worth area. DJ Royalism is a member of the elite DJ crew "The League DJs" and owns Royal Sound & Entertainment.