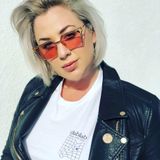 Never miss another
show from DJMamabear

Sister of the infamous Sweaterfunk Crew, Hostess of 'The Honey Pot' on Dublab.com. As a young girl, Mamabear's musical tastes were formulated by spending nights in the roller rink, catching air to funk and hip hop as well as taking note from her parents new wave records. Sunday nights were always spent with Art Laboe. Fast forward to 2007 when she purchased her first pair of Technics; she went from playing in her bedroom to making her DJ debut in San Francisco and in 2009 became part of the Sweaterfunk crew, an all vinyl party which has hosted Dam-Funk, PB Wolf, Steve Arrington, Leroy Burgess, Howard Johnson, Onra, Psychic Mirrors, Bendek, Spinna, Kon & Amir, Daz-I-Cue to name a few. Drawing inspiration from the many cities she has called home (San Francisco, Chicago, Queretaro, MX, Las Vegas) MB is eager to share that eclectic experience which is essential to her sound.