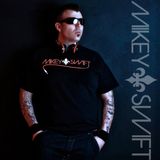 With a career spanning 30 years, 100+ clubs & 18 states, Mikey Swift is one of the premier DJs in Las Vegas. Mikey has spent almost 20 years working the Las Vegas nightlife scene and has played many of the nightclubs, lounges & pool parties. He is the “Official DJ” for PRO FIGHT LEAGUE (PFL) Live on ESPN, and the resident for a multitude of venues in Vegas. Noteworthy accolades include: 5 Time DJ for NYE at ‘Madison Square Garden’ in NYC, the “Official DJ” for WSOF, the “Official DJ” for the UFC, the “Official DJ” for WEC, “Program Director” for the world famous Seamless Afterhours, and the nine year resident of the Hardrock Hotel, which included residencies at REHAB Pool Party, Body English, Wasted Space, and Ainsworth. These positions, among others like XS and Tryst at the Wynn, had Mikey working along side some of the biggest Urban & EDM stars…his unmatched integrity and work ethic made him the undeniable choice!