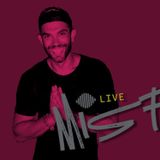 Never miss another
show from DJK (Kypros A. Karaviotis)

Born and raised in Nicosia, first started djing in 2006 as resident and music coordinator at “Sushi La Bar” where he started building up a fan base and set up the standards in “Music & Dining”, playing music styles such as Nu-swing & jazz, electro tango,disco, house & electronica.

With a strong musical background to back him up, he started experimenting with dj sets in 2009, playing till now in the best venues in Cyprus like Guaba Beach Bar, Ammos Beach Bar, The Market Co, Patio Cocktail Bar, WSTD etc. as well as in Athens and Mykonos!