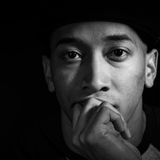 For John Lutchman - formerly known as Johnnybee – love for music came early when he bought his first vinyl record at seven years old. Growing up in a musical family in Brooklyn, his passion grew with each record, cassette, and new upgrade that he added to his musical playground. It didn’t take long for him to make up his mind to take his passion to the next level. It’s hard to put a finger on his unique sound, but it’s heavily influenced by the breakbeats of the B-Boy era to the Caribbean sounds from his family heritage to a wide spectrum of the house music world, among other genres.