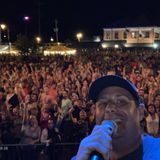 DJ Jason Neuman is one of the areas best known DJ’s. He started his career at the age of 13 in 1992. He landed his first gig doing a local high school homecoming in 1993 with a home stereo system and homemade light show. Jason’s passion for music made him want more. He continued doing parties for friends and some local raves. At the age of 16 he purchased his first set of turntables with his first paycheck from his after school job at Wendy’s. His passion continued as he taught himself to scratch and mix beats. Some of his biggest influences at that time were Bad Boy Bill, Bobby D, and Too Kool Kris.