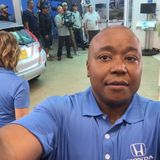 Never miss another
show from DJHustle1

DJ Hustle Musical Artist & Celebrity DJ
Since he was a kid, he loved music and was influenced by K-Day 1580 AM and Soultrain. This was the beginning to building his career as a DJ and dancer. He found enjoyment in organizing the music entertainment during his mother's parties on her record player. He eventually found his talent of blending music, then began mixing and scratching on her 45s and singles. Now, instead of "playing" on mom's record player, he's mastered the skill of spinning on his turntables and CDJs for events across the country. Hustle still enjoys providing music entertainment for intimate events such as weddings and parties, however, he has also added to his resume a series of car events while on tour with Battle of the Imports, NFL's Dallas Cowboys, and DJ'd for SuperBowl Diet Pepsi Commercial.

Alongside being a DJ, Hustle is also a SAG Actor. He has appeared in numerous TV commercials, print ads, and SAG movies. This seasoned DJ, and growing actor.