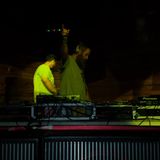 Most folks know me as "The Rabbi" or Rabbi Eric. I've been involved in the music biz from about the age of 14, when I made my first mix. I've DJ'ed here & also when I was stationed in Germany. I made the transition from the club scene to the RAVE scene in the mid-90's. Early on in that period, a youngster by the name DJ FiXXX (waz up, Jeff?) tagged me with the name Rabbi when he found out that I was STUDYING to become one.... still workin' on dat... I met a bunch of really good folks, promoters and DJ's, which motivated me even more to become a promoter/producer. Later, I met who I thought was the love of my life & got married... too bad she had other plans. ;) Eventually, I got 'high-jacked on the highway' (actually @ the Katy Mills Mall), and the State held me hostage from 8-30-02 until 5-7-12! But fortunately, now I'm back on the scene and doing music again as a Founder of the "Unite As One FREE Beach Music Festival"... while Havok & I raise our blessed baby Junglist, EthanBearz!