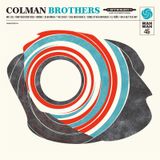 Colman Brothers have been releasing dancefloor latin-jazz on 7″ vinyl on the Wah Wah 45s record label. Their debut album is out now & the live show is coming soon to a place near you....

The Colman Brothers are Mat (trombone) and Andrew (trumpet/flugelhorn) and on occasion sister Sara on vocals.
Both are busy musicians who have performed/recorded with jazz, pop, rock, funk and soul musicians across the world.

“I like everything the Colman Brothers do” - Gilles Peterson (Radio 1)
“Love the record, one of the best of this year” - Cerys Matthews (BBC 6Music)

Hear all their influences in this regular Influences Mix series...