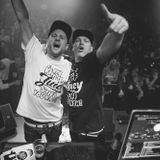 Juicy is a club party and DJ-duo established by lifelong music maniacs and former rappers, now DJ's and promoters; Chris Stallion and Patski Love in 2004. Juicy quickly made it to the top of club-nights and events in Oslo, around Norway and further on throughout Scandinavia and then New York where the duo recently played at 4 of the hottest spots in town; 1 OAK, Butter, The Eldridge and The Rub at Southpaw.

In 2006 and 2007 Juicy was crowned both "best club party" (Kingsize Magazine and Aftenposten) and "best party night of the year" (Whut It Dew Oslo in '06 and Diplo in '07) in Oslo/Norway. Now in 2010 Juicy was awarded with the biggest honor you can achieve in culture in Oslo; the Oslo Price from renowned magazine Natt&Dag handed out by the Mayor of Oslo; Fabian Stang.

Musically Juicy range from classic Hip Hop to 70’s and 80’s Soul, Funk and Boogie throughout House, Electro and modern Club music genres depending on what kind of party Chris & Patski are playing at.