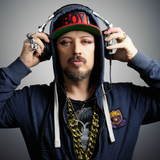 Boy George is universally recognised as one of the music scenes most iconic artists and for the past 30 years has maintained a strong position at the forefront of this ever-changing, multi-faceted industry. With an ever-expanding and prolific musical output, his presence as a DJ and producer continues to attract high praise from the scene’s most revered tastemakers and media outlets.

A DJ since the late 70’s, Boy George has had a long and successful career associated with house music stemming from early acid house and Chicago grooves in the 80’s, through to electro and tech house in the 90’s and 00’s. One of the Top 100 DJ's in the world for nearly 25 years, his travel commitments have seen him pack out events in over 75 countries around the world at powerhouse venues like Amnesia in Ibiza, Ministry of Sound in London, Zouk in Singapore, Pacha in New York and Guvernment in Toronto.