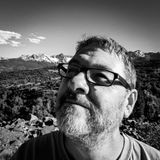 Never miss another
show from Box Of Visions

Box of Visions | #061 | Sweet Isolation
by Box Of Visions

Box of Visions | #007 | Meditations on Integration: A Tribute to Hal Willner
by Box Of Visions

ABOUT THE SHOW
The Box is a mysterious device found in liminal spaces and the silence between digits propagated on numbers stations. The transmission arrives on a longwave of late-night grooves, cinematic sounds, ethereal pop, soul, dub, new jazz, and general eccentricity.

ABOUT YOUR HOST
Mark Duggan has been a DJ, audio producer, and public radio programmer for more than 30 years. He cut his teeth in the 1990s producing eclectic, jazz, and world music shows for KGNU Boulder Community Radio. He's also been a jazz host at Arizona Public Media and overseen programming and content at KSUT, KDNK, and KBUT.