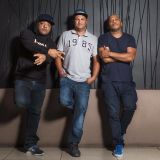 Never miss another
show from BeatBangaz1

#the jump off mix

Hip Hop Back in the Day show
HQ
by AzuhlReposted

#the jump off mix

The influence of the Beat Bangaz as a collective and individually cannot be measured across the African hip hop landscape. Pioneers in the field of Hip Hop DJing, radio and television programming, youth developmental work - the dents they cause within and outside the South African entertainment and musical spectrum will be felt for years to come,â€ Dr. Adam Haupt, Senior Lecturer Film & Media Studies â€“ UCT.

As a collective and individually the Beat Bangaz (Ready D, E20, Azuhl) boasts with careers that spans more than two decades within the field of hip hop and DJâ€™ing. The Pioneering African DJ collective has itâ€™s roots within the Cape Town hip hop culture that emerged in the early 80â€™s and the group has officially formed in the 90â€™s after Ready Dâ€™s successful career as a battle DJ competing in the prestigious Technics DMCâ€™s locally and abroad in the US, London and France. Ever since itâ€™s inception, Beat Bangazâ€™s missio has been to promote and elevate the art of DJ