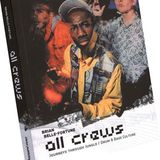 Never miss another
show from AllCrewsBook

Staunch live on Rude FM 2018 wrap up special
by AllCrewsBook

All Crews by Brian Belle-Fortune is over 10 years of journeys through the Jungle / Drum & Bass scene and features interviews with the music's top artists. However, it also delves deeper and looks at the pirate radio stations, labels, crews, promoters and ravers that form the backbone of the scene.

Since graduating from Sussex University in 1994, Brian Belle-Fortune conceived and co-produced One in the Jungle, Britain’s ﬁrst national Jungle program for BBC Radio One. His TV credits include BBC South, Channel 4 and MTV where he specialised in underground youth culture, particularly Jungle.