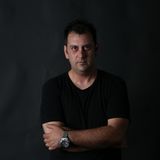 Zisis Dadalis aka ZISIS D was born in Larisa GR in 1980.
From his childhood had interesting to music technology, music machines and to music in general.
In the age of 14 had his first radio show and was working as a sound engineer in newsprint radio shows. After that was working as Dj at local cafes, bars and clubs.
The choice of the tracks and his technique on the mix elevates the mood of the public.
This continues until today.
At 2005 he started experimenting in music technology and on the production of electronic music.
the music's influence is now based in Down tempo,Organic House,Deep House, Electronika and Progressive.
Labels :
Lump Record,Soundteller Records,Crossfade Sounds,INU,Shango Records,BC2,Astrowave,Vesta,Bevel Rec,OLD SQL Recordings,BQ Recordings,Clinique Recording,Beat Block Records & Many More ...