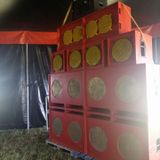 Ras Abubakar founded in 1996 the « Zion Gate Hi-Fi» in Nantes in a spirit of up keeping the Roots and Culture Sound System tradition around its basic symbol: Word, sound and power. With their own equipment and boxes, they play various type of Roots music going from Studio 1 originals to Classic & Rare Reggae cuts also including Rub-a-Dub, Early Digital and a lot of Rockers & early 80’s Steppers… Orthodox Roots Music!
Nowadays, the crew is based around Ras Abubakar with Nassadjah & Prince on mic, Mark Skeete (Mostec pre-amp builder, a very skilled technician) operating the sound and I Youth Tubby taking care of special effects while Emmanuel is in charge of the logistic. They already played in various stages and festivals all over France, but also in La Reunion (Indian Ocean), Sweden, Finland, Belgium and Switzerland.
"Jah loveth the gates of Zion more than all dwelling places of Jacob… HIM foundation is to be found in the most holy and secret mountains of Zion”.