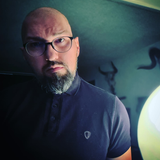 Never miss another
show from XNDL

XNDL has spent over a decade behind the turntables, focusing on turntablism since 1998 and producing since 2002.

In 1999 he founded the Offbeaters artist community, in 2001 the Offbeat Network followed by the indie- record-label SUBVERSIV* REC in 2002.

For about 5 years SUBVERSIV*REC has been released more than 45 releases presenting a lot of underground/abstract hiphop artists from collectives like Anticon, Project Blowed, Afterlife, Plague Language or Shadowanimals and even their own artists, The Offbeaters. On December 2007 SUBVERSIV*REC. closed it´s doors and XNDL started a small project/sublabel called COGNITIVE*DEFECT what is specialized in more experimental Elektronika.

As a producer, he’s been turning heads around the world with his music ranging from hip hop to electronic to drum and bass/brokenbeats.Since 2002 he has also done the mastering of numerous releases featuring artists like Botanica Del Jibaro, Shapeshifters, Anticon, Plague Language and many others…