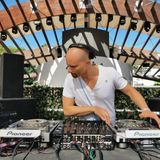 Never miss another
show from xavidiaz

He play 3 decks (Pioneer CDJ) at same time, layering and shaping the sound taking the dance floor energy to the next level. He is interested also in dj roots 'Vinyl' and technology applied to music, drum machine, Push 2, and other sort of electronics instruments.

New in music production. He will be releasing his first house track in 2020.
His target is to transmit the good vibes that music brings me when I am rocking records.