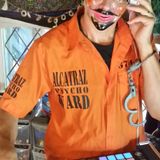 JINX IN DUB b2b BRAINY WONKUS. From Deep in the Archives - A Chill Out Session.
by Brainy Wonkus

SQUATTER IN THE WHITE HOUSE (Underground Sound #41)
by Brainy Wonkus

https://twitter.com/BrainyWonkus
Brainy Wonkus started collecting vinyl at the age of 7. His mother, Mother Wonkus, had a job changing records on duke boxes and when Brainy wasn't at school, he'd help out. By his teen years the vinyl was stacked high. His elder brother, Brother Wonkus, whose's interests were electronics and music, built his own mobile twin deck system years before 1210s were a thing. Like this the stage was set for Brainy's DJ journey. F>fwd a decade n Brainy is immersed in the Northern free party scene with The Rhythm Method Sound System - defying the criminal justice bill n rocking it in more strange and outrageous venues than can be recalled. Brainy's musical tastes have always been diverse and his DJ sets unpredictable. These days Brainy is mostly on-air with Soundart Radio. The Underground Sound Show is an eclectic affair. Brainy Wonkus lives in Devon, off-grid in a house made of sticks, canvas n blankets with his wife, 2 boys and a blind, deaf cat.