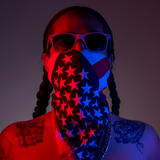 WERD was the name of the first radio station aimed at African Americans. The station was established in Atlanta, Georgia during the 1960s.
WERD Atlanta was considered to be the first radio station owned by an African-American. Jesse Blayton purchased it in the late 1940's hiring "Jockey" Jack Gibson as the signature DJ. The station was housed in the Masonic building on Auburn Avenue--then one of the wealthiest black neighborhoods in the United States. Located in that same building was the headquarters of the new Southern Christian Leadership Conference led by Dr. Martin Luther King. As the story goes, King would beat the roof of the office with a broomstick as a signal to send the microphone down when he wanted to make public addresses.