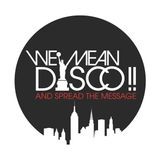 Never miss another
show from WE MEAN DISCO!!

One of austria finest and at the moment one of the biggest house & disco exports. Dj since 1995 and living somewhere on planet earth
A truly 24 hours vinylplayer whos addicted to disco, funk, boogie grooves and deep soulful housemusic. influenced by the sound of NY City like the Paradise Garage and Larry Levan.

He had Performances in countless venues and clubs all over europe.