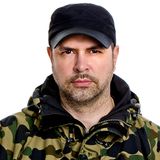 Never miss another
show from Wavewhore

With releases on high profile record labels such as iBreaks, Elektroshok, Hardcore Beats, Broke and Electrofly, New York City based Wavewhore has established himself as one of the nation’s leading electronic bass music producers.

His skills behind the decks have also led to headlining appearances across the US, Europe and Asia and his music and mixes have been featured on many of the world’s top broadcast media outlets including BBC Radio 1 London, WKTU 103.5 FM New York, KISS FM London, RTE Dublin, Sirius Satellite Radio and MTV.