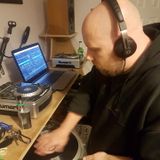 I started mixing when I was 16 I was just getting started when decisions I made brought it to an end just over a year later. About 10 years later I was shopping for my son 5th birthday and saw a controller and bought it for him that was 2012. After I had a play about with it and got the feel for mixing. A few years later I bought some turntables mixer and traktor with time code vinyl. I play UK hardcore, happy and old skool hardcore, also jungle and DnB. I am currently doing 2 shows at the weekends Saturday night on Sub Dance Radio 92.2 (west midlands) and online 10pm till midnight, then Sunday afternoon 3pm till 5pm on Lazer FM Worldwide (all links below) both shows are also streamed on multiple Facebook live pages, YouTube live on my channel and on Mixcloud live