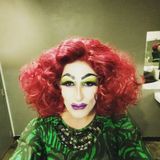 I began DJing (as DJ Gerson) in 1999, where I was the main DJ at a party in NYC called Pop Rocks!, I also DJed at Barracuda, The Cock, The Hole, The Eagle, Stonewall and The Chapel at The Limelight! In 2004 I moved to LA, where I have been DJing at places such as Micky's, Here Lounge, Ivar Club, The Eagle, FUBAR, Eleven, MJ's and Circus, in 2008 I switched from DJing to VJing because I enjoyed dancing along to the choreography in the music videos that I play, and my performing along with my videos went to a whole other level in 2011 when I began VJing in drag as my alter ego Stalker Channing! My music is usually very pop/top 40 but I have a vast knowledge of music from the 70's to today in many different pop genres (from showtunes to edm, and EVERYTHING in between).