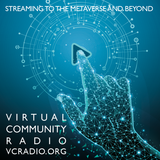 Virtual Community Radio (VCRadio.org) is a music and spoken word internet radio station, aimed at communities in virtual worlds, notably Second Life, as well as listeners on the wider internet. The station was founded in early 2021 by DJ and co-host of the Designing Worlds TV series, Elrik Merlin, with the invaluable support of Caledonia Skytower of Seanchai Library, and Honey Heart of Elite Equestrian.

VCRadio is underscored by a 24/7 "sustaining music service" based primarily around Light Classical music, with a little Easy Listening, Classical and Early Music thrown in, plus special programmes focusing on a particular genre, such as TV and film music and musicals. On top of this is a growing roster of spoken-word programming that includes drama, readings and original talk show series and forms the primary focus of the station.