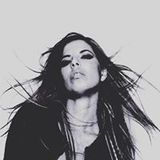 Today production is enhanced in the future and wanting to incorporate new elements to his sets, so even in the future to live act. His track "Fake Rain" (Sound Difussion rmx) was
chartered in September 2008 by Hernan Cattaneo